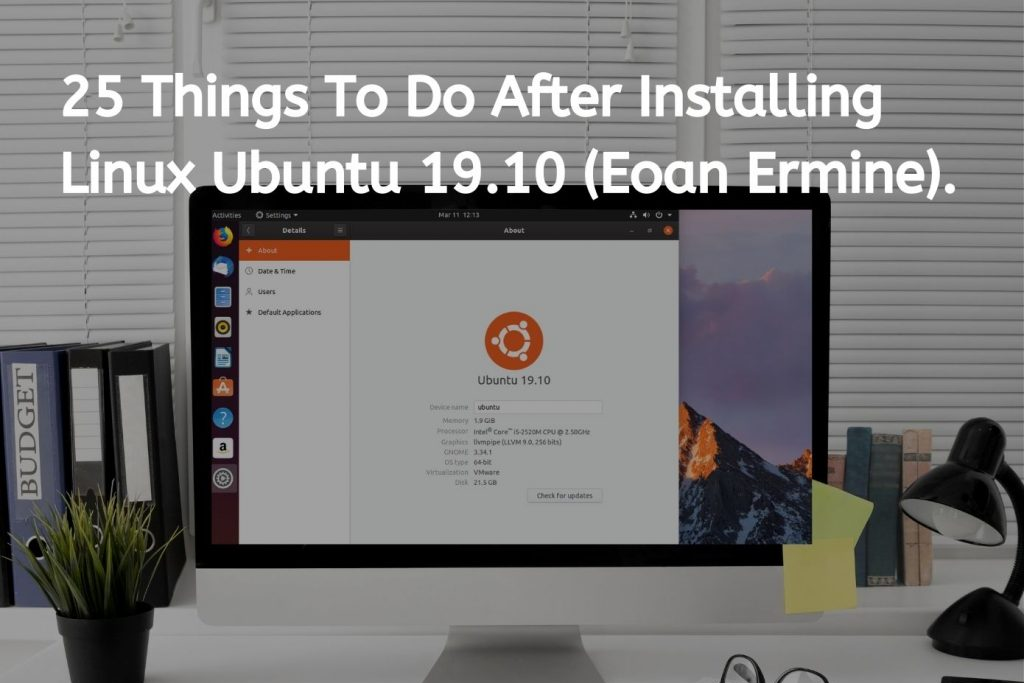 Linux Ubuntu 19.10 (Eoan Ermine) is a popular, widely used and open source operating system from Canonical that is absolutely free to download, use and share / distribute. Ubuntu 19.10 ships with all the apps you may need to run an organization such as a school, home or business enterprise. Applications such as the libre office suite, thunderbird mail, the firefox web browser, transmission torrent downloader are built in apps that you can use just after installing linux ubuntu on any computer. Ubuntu 19.10 can be deployed on almost any computer, virtualization platform and even in the cloud on cloud services such as AWS. This tutorial provides a guide on 25 things to do just after installing Linux Ubuntu 19.10. These things include installing ubuntu system and package updates, installing ubuntu restricted extras, setting up system a backup and more! A free video tutorial is also available on youtube, click on the “VIEW YOUTUBE TUTORIAL” button to watch it now!
WATCH YOUTUBE VIDEO

In order to complete this tutorial successfully the following is a list of items that may be needed or required. Please ensure to have these items available before taking implementation action on this tutorial :
1) A Desktop or laptop with atleast 4GB RAM, a dual core processor and a 250GB hard disk
2) An Internet connection to download Ubuntu software updates and software packages.
3) Access to the ubuntu root user account.
4) Linux Ubuntu 19.10 (Eoan Ermine) – 64 or 32 bit.

Canonical, the makers of linux ubuntu decided to migrate from the Unity desktop environment to the GNOME desktop environment. However most of the known ubuntu features such as the dock and top panel still look the same. The following is a detailed list of things to do after installing linux ubuntu 19.10 (Eoan Ermine) which utilises the GNOME desktop by default. Inorder to get the most out of this tutorial follow the steps in order, however you may skip any of the steps if you wish to do so. 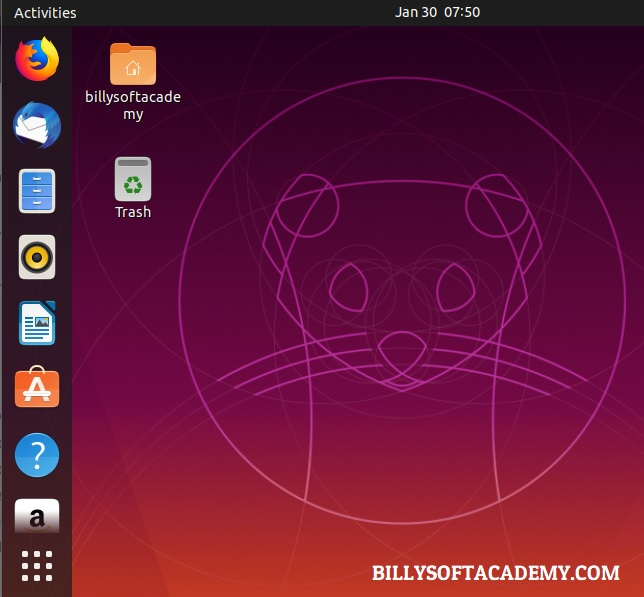 1) The first thing to do after installing Ubuntu 19.10 / 19.04 is to check for updates. These updates provide a way to install the latest component and package updates as well as bug fixes and security fixes which will ensure you ubuntu system stays secure.

Click on the “SHOW APPLICATIONS” button on the dock and search for “SOFTWARE UPDATER” on the search bar. Once opened the “SOFTWARE UPDATER” application will automatically check for updates and prompt you to install them. Click on the “INSTALL NOW” button and ubuntu will prompt you to enter the root user password. Updates will be automatically downloaded and installed. If you prefer using the command line interface, press “CNTRL + ALT + T” and run the following command in the terminal: 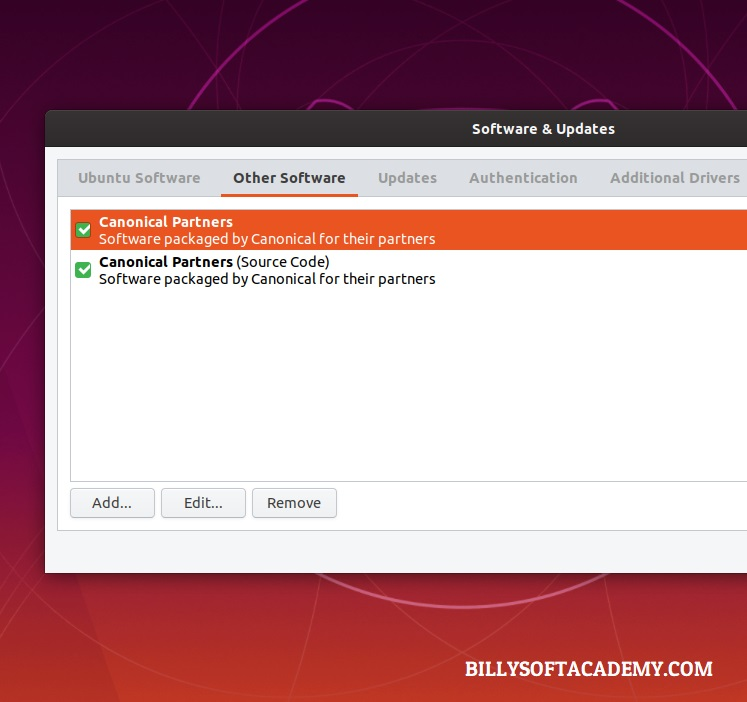 2) An Ubuntu software repository is a server or central resource which hosts a package or set of packages that can be downloaded from. To enable additional repositories, click on the “SHOW APPLICATION” button and search for “SOFTWARE & UPDATES” on the search bar.

Open the SOFTWARE & UPDATES application and on the OTHER SOFTWARE tab enable the “CANONICAL PARTNERS” check box. Click on the ADDITIONAL DRIVERS tab if you have any proprietary devices ubuntu will automatically prompt you to either choose whether to install the closed source proprietary software or open source software if available. Click on the ‘CLOSE” button and on the “INFORMATION ABOUT AVAILABLE SOFTWARE” dialog box click on the “RELOAD” button.

3) Ubuntu restricted extras are a set of packages that are not included by default primarily because Ubuntu only includes completely free software in out-of-the-box installations. Media formats such as MP3 and H.264 are patented / copyrighted and legally distributing software that use these formats may require paying licensing fees to the patent owners. This is the reason why you have to manually install these restricted extras.

To install press “CNTRL + ALT + T” on your keyboard to open the terminal application and run the following command as root user: 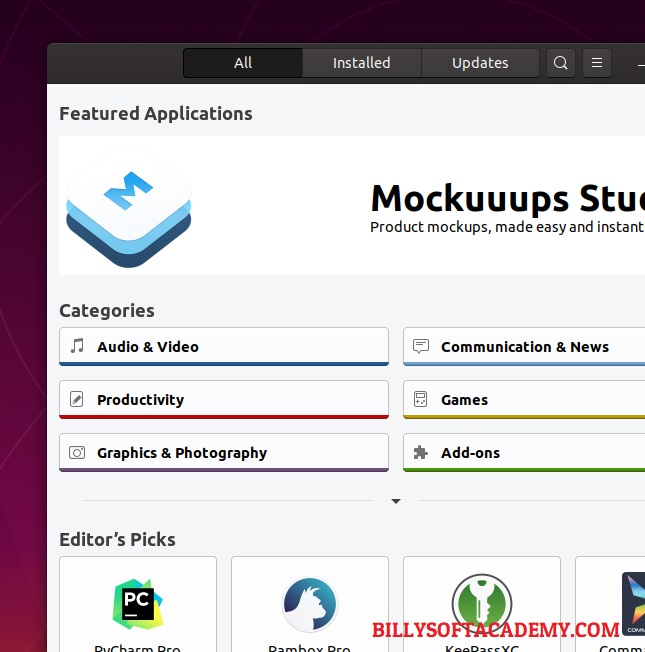 4) Its a good idea to install apps that you use on a daily basis and to avoid wasting disk space by installing unwanted and unused software. Here is a list of commonly used apps that are available and can be installed from the ubuntu software centre. 1) VLC – a popular video player with great features. 2) Thunderbird Mail – The best free email client for 3) Skype – an online messaging and video chat application. 4) Atom – a rich and highly customizable text editor for everyone! 5) DropBox – an easy to use personal cloud based storage and backup solution 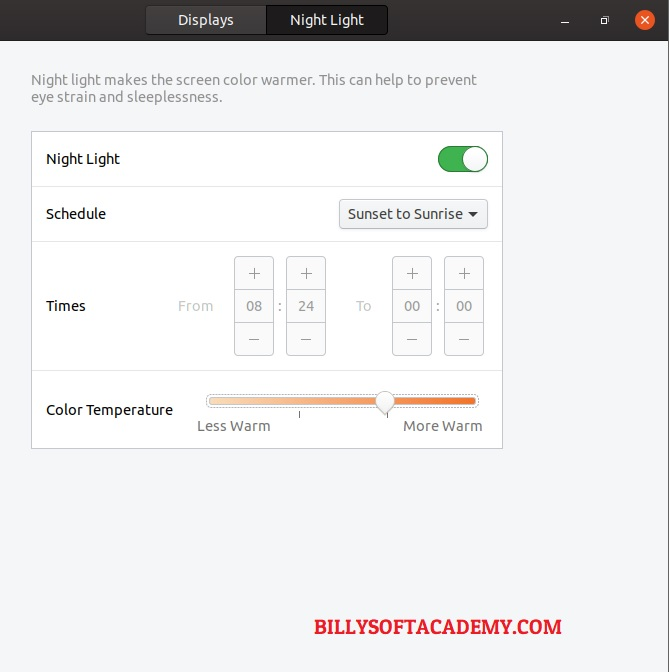 To enable night light go to “SETTINGS > DEVICES > DISPLAYS > NIGHT LIGHT” and enable the “NIGHT LIGHT” switch. You can also set the SCHEDULE option to “SUNSET to SUNRISE or “MANUAL SCHEDULE” to choose a time when night light will be active. You can adjust the color temperature to your liking using the “COLOR TEMPERATURE” slider. 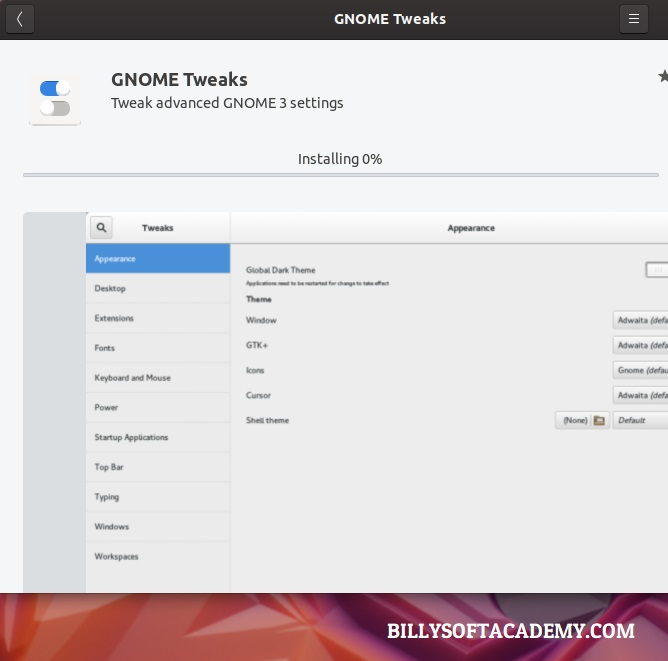 7) Anbox is a linux program that makes it possible to run android apps and games on almost any linux based operating system. Anbox can be installed on Linux Ubuntu, Redhat Enterprise Linux, Debian, CentOS, OpenSUSE however the installation process is the same and involves two steps: 1) Installing kernel modules needed by anbox. 2) Installing the anbox snap. Run the following commands to install the kernel modules and the anbox snap: 1) sudo add-apt-repository ppa:morphis/anbox-support 2) sudo apt update 3) sudo apt install linux-headers-generic anbox-modules-dkms

Step 10: Setup And Install Backup Software To Protect Your Data.